A question I often get asked, "can a detection dog screen shipping containers effectively without having to use air sampling equipment" ?

My answer is yes, without a doubt, we do it every week and detection dogs from my experience are a great way to screen shipping containers and I don't believe an air sampling equipment is always needed.

Over the last 10 years I have been asked to screen over 25,000 shipping containers for Her Majesty's Revenue & Customs, the Police and other law enforcement agencies. Of those 25,000 containers screened by my dogs, 129 have been identified by detection dogs to contain a target odour and 111 of those 129 actually contained the target odour. Tobacco, Cash (Bank Notes), Cannabis, Amphetamine, Cocaine and Ketamine have all been successfully seized from shipping containers as a result of detection dog screening. Of the 18 containers that the dogs indicated on and were found empty or without contraband, 6 of them (completely empty), had previously contained tobacco, so the tobacco detection dog was not wrong. A residual odour had been left in the container and identified by search dogs, we were just too late.

Are shipping containers waterproof and airtight?

Shipping containers are a strong metal box that are used to transport goods from one location to another and normally have a pair of doors on one end. The doors are equipped with heavy-duty rubber door seals that are meant to keep water and wind out, but can odour escape? Yes, which is why detection dogs can successfully identify shipping containers containing contraband like illegal tobacco and drugs.

When training a detection dog to screen shipping containers it is the area around the doors that I focus all of my training, on the rubber seals and hinge areas. Why? Because as already explained, shipping containers are a sealed metal box and for a detection dog to stand any chance of identifying whether the contents of the container are of interest to law enforcement, then we must focus on the weak areas of this metal box. It is the door area, the rubber seals and the hinges that, from my experience, are the areas that will allow odour to leak from these huge metal boxes, which have become one of the worlds preferred methods for trafficking illegal items and illicit goods.

It is estimated that over 400 million containers are moved around the world by sea every year, transporting 90% of the world's cargo. So when shipping containers are used in such huge quantities and travel the world it is little surprise that criminals and criminal gangs take the opportunity to use containers to smuggle items like tobacco, drugs, weapons and even people. Here in the UK, like other countries we have many ports handling shipping containers and it's pretty safe to say that not every single container is screened for illicit goods and it surprises me that more dogs are not employed to screen containers in ports as they are a very reliable and quick method to non intrusively screen containers. Compared to scanners, which are normally large pieces of technical equipment and require containers to be moved to accommodate a scan, a search dog is a cheaper and more mobile option for screening containers.

Whilst talking about smuggling, I recently read an article regarding the illegal trade in wildlife (IWT) and it stated that container shipping is now the go-to choice for smuggling large quantities of wildlife products such as ivory, pangolin scales and timber.  The cost effectiveness and ability to ship large quantities and heavy weight with added benefit of a very low likelihood of detection.

In 2019 alone, 90 tons of pangolin scale and 15.5 tons of elephant ivory were seized on container ships heading out of Africa to Asia.

As I've already stated, in the last 10 years I have screened over 25,000 shipping containers with search dogs and the results have been brilliant. Some would say that dogs identifying 129 containers out of 25,000 screened is not a good percentage, but I believe the way we do it, is the most thorough, accurate and importantly the quickest way to screen containers with a search dog. This week using two search dogs I was able to screen 500 containers in one and a half hours and the dogs actually checked all 500 containers using their olfactory sensors to target the key areas of each container, the doors and rubber seals. So, when you compare what we do, to random air sampling of containers, then I believe we do it better, for the task that we have been set. We normally only screen containers on ground level, the screening of containers that are stacked is a virtually impossible task for a search dog team, so remote air sampling might prove to be more effective with stacked containers than we can be.

Having said that, a few months back I was with a Latvian Customs dog handler and his dog actually picked up on an odour in a container that was stacked on another. He told me that the behaviours his dog was showing was enough for him to ask a fork lift operator to move the container to ground level. Once on the ground the dog gave a lovely positive indication and the container was opened, it was full of tobacco being smuggled.

What is interesting to note is not only the lengths that criminals go to, to transport and distribute their illicit goods but the lengths they go to, to avoid detection. Over the last couple of years I've seen a big increase in the amount of distractor odours placed within containers, in an attempt to hamper detection dogs. Well aware that law enforcement agencies are using dogs to screen containers, criminals are now actively using items like bleach, disinfectant and coffee to try and mask the odour of their illicit goods. You will see in some photos I've shared of one container which had several kilos of coffee emptied and strategically placed around the doors and rubber seals inside the container to hide the load of illegal tobacco. It didn't work, my dogs were still able to indicate the presence of tobacco within the container to Customs officers.

It's also worth mentioning that not all of our finds in containers using search dogs have been large finds. On a number of occasions the dogs have indicated the presence of smaller quantities of illegal and illicit items in a container. On one occasion I remember a drugs dog giving a very liable indication on a fairly new shipping container, only to find one kilo of Ketamine inside. On another occasion a tobacco dog identified a container which had just one master case of cigarettes inside, so 10,000 cigarettes, in sealed plastic packaging, within a cardboard box.

Using a search dog to screen shipping containers is thorough, accurate, quick and most importantly the best non-intrusive way. Seals and locks only need to be broken when a search dog indicates the presence of the target odour. 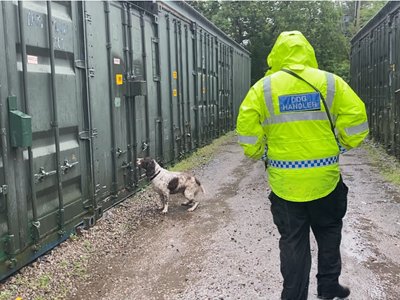