TWO Pembrokeshire-based sniffer dogs have proved once again they are canine crime-fighters, this time sniffing out a huge haul of cannabis in the west Midlands, thought to have a street value of up to £200,000.

During a covert illicit tobacco operation last Thursday, September 9, Walsall Trading Standards, in partnership with the police, got more than they bargained for when detection dogs from Pembrokeshire-based B.W.Y Canine Ltd sniffed out the cannabis.

As part of the pre-planned Trading Standards sting, several other premises thought to be trading in illicit tobacco and dodgy vapes were also raided and illegal tobacco and ‘bang vapes’ were also seized from two shops.

The drugs were discovered in locked metal containers.

A specialist locksmith was called to find a way in through the boxed walls of steel.

Trading Standards discovered a number of large and ‘ready to buy’ bags of dried cannabis, all of which were removed by West Midlands Police.

In another raid at a targeted site, Scamp sniffed out a big stash of illegal cigarettes hidden in a sophisticated hideaway directly behind a hand drier in a toilet.

The drier was closed with an electromagnet, but, when forced open, it revealed a void in the wall - which contained around 6,000 illegal cigarettes and some hand-rolling tobacco.

There was praise for the dynamic duo from Garry Perry, deputy leader of Walsall Council: “Well done all, and bravo Scamp and Yoyo. My simple message to those criminals who think to trade in drugs, illicit tobacco and dodgy vapes, is simple - it does not matter how clever you think you are - you cannot outwit these dogs, or Trading Standards and the police.” 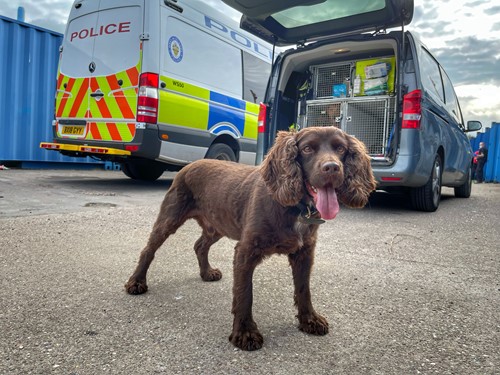